ROUND 2 of our New Play-Reading Festival KICKS OFF this weekend (May 21-23) and we wanted to introduce you to the team behind Who’s Afraid Of the Big Bad Book? Maryanne Melloan Woods (Playwright) and Jack Mitchell (Composer)

When did you know you wanted to be a playwright/composer?

Maryanne:  I knew I wanted to be a playwright starting in the 4th grade.  I had a strong sense that I wanted to be either an actor or a writer by that time, and I realized that by doing dramatic writing, I could combine the two!  I still act out scenes in my head when I write plays.

Jack: I had that “a ha” moment when I took an “Intro to Songwriting” class at Northwestern University the fall of my sophomore year. I had always played piano but it was the first writing class I ever took and almost immediately after starting this course, I knew I wanted to write music and lyrics.

What was the 1st play you wrote?

Maryanne: The first play I wrote was a version of The Six Wives of Henry VIII, which I wrote and directed at my school in the 4th grade (also playing two of the wives!)  I no longer have a copy of this early opus, and honestly I cringe at the thought of what this precocious adaptation must have been like, but kudos to the Westfield NJ public schools I attended for letting me attempt such a thing!

Jack: The first musical that I co-wrote was the Waa-Mu Show at Northwestern University in 2011. For those not familiar with Waa-Mu, it’s a 90 year old tradition at NU and is the largest fully student-written musical in the country! I jumped in and was head writer for the show in 2011 and 2012 and co-chair/head writer of the show in 2013.  I was able to be a part of the creation of three brand new musicals from the ground up and probably wrote or co-wrote over 25 songs for the shows over those three years. It was certainly trial by fire but I learned so much about musical theatre writing and my own voice as a composer through that experience.

Why should audiences attend the New Play-Reading Festival?

Maryanne: There are so many reasons why audiences should attend the New Play-Reading Festival but I’ll boil it down to this: after the year we’ve all had, doesn’t sharing something as auspicious as the birth of a new play/musical with your kids or grandkids just sound uplifting and even miraculous?  “Miraculous” in that art has been created for your enjoyment, and skillfully curated by The Growing Stage, even during the most trying of times?  I think so.

Jack: The New Play-Reading Festival is an amazing opportunity to see exciting new theatrical works for kids and families as they are being developed. While the pandemic has changed how the readings are presented this year, it’s amazing that everyone can tune in online and watch from around the world and give feedback that will help shape these shows as they continue in their development!

What do you hope audiences get from attending your play reading?

Maryanne:  A break 🙂  That is to say, we had a great time putting this show together along with TGS, and would like to think we’re offering a show with both heart and humor; the perfect entertainment break in your family’s routine!

Jack: Presenting a new musical reading is uniquely challenging and uniquely exciting! We hope that audiences get a sense of the magical musical world of  “Who’s Afraid of the Big Bad Book” through the song demos and what the show might look like and sound like when staged. I also hope audiences of all ages find themselves absorbed in Lauren Child’s delightful story and enjoy seeing classic fairytale characters presented in a whole new light!

What’s it been like working with The Growing Stage team?

Maryanne: It’s been wonderful working with The Growing Stage team.  The way Danny Campos and the TGS team, along with our director, Emily James, has made this festival work as a Zoom event has been nothing short of astonishing.  We’re very grateful.

Jack: Working with The Growing Stage team has been a joy! It has been so helpful to our process to hear the show performed by such wonderful actors and have the opportunity to develop our musical at such a celebrated theatre for young audiences. Danny, our director Emily, and the whole team have been so supportive and encouraging throughout the process. We are lucky writers to be developing a musical with The Growing Stage!

About Who’s Afraid Of the Big Bad Book?:

“Who’s Afraid of the Big Bad Book?” is a fun family musical in one act. It’s the story of 8 year old Herb, who loves his storybooks, but doesn’t take very good care of them. One night when his friend Ezzie is sleeping over, Herb falls asleep while reading his book of fairy tales. When he wakes up, he’s inside the book, face to face with different characters as he journeys through the book. The characters are not very happy about how Herb has “ruined” their stories by doodling, cutting things out and dropping food in the book. None of the stories work properly any more, thanks to him! On his journey to find a way out of the book, Herb learns that stories belong to everyone, so he needs to take better care of his things.

Learn More About Round 2 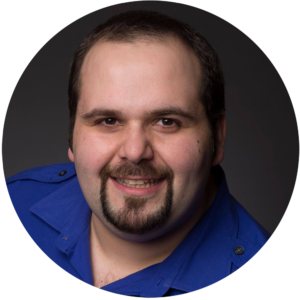